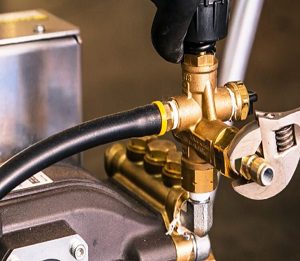 Pressure washers are not too complex machines. They are just a pump attached to an electric motor or engine. They are used in surface cleaning and can clean everything effectively in just minutes. Like all devices, they can also have some problems, which does not necessarily mean that you must throw your pressure washer in the garbage. This article will discuss some common pressure washer issues and how to fix those problems.

Common Issues With Pressure Washer And How To Fix Them

Suppose the engine is not starting after being unused for a long time. And if you have put the oil and fuel in it, it might be caused by the fuel gumming in the carburetor, or it can be due to the old spark plug. The issue can be solved easily by washing the carburetor with the cleaner. You can easily wash the carburetor by disassembling it. The issue can also be due to the fuel gumming in the fuel tank, which is caused by leaving fuel in the fuel tank for a long time. The solution is the same as carburetor cleaning. If the spark plug causes the problem, there will be no spark. Try to clean the spark plug and if you see cracks in it, replace it with the new one.

Little Or No Water Pressure

The most simple cause of this problem is the choking of the nozzle. Using the degraded nozzle can also cause this problem, and you have to replace it to solve the issue.

A defective thermal release valve can also cause the leaking pump problem; this valve is responsible for the exit of heated and pressured water leaving the pump if the trigger is not squeezed. If this valve has malfunctioned, the accumulation can cause a pump leak. The issue can be solved by replacing the parts of the pump that are leaking or changing the seals.

Water leaking from the wand or the trigger is another common problem in the pressure washer, and this can be solved easily in a few steps. Leaking of water decreases the pressure at the end and causes the sleeves and clothes to get wet unnecessarily. You have to unscrew and then wand with the screwdriver to fix the issue. Moreover, examine the inner part of the wand carefully, and if you spot any cracks, you might need to replace the rod. If there is no visible damage, it is probably due to the degradation of the rubber seal. Lastly, replace the seal with the same size and thickness seal to fix the problem.